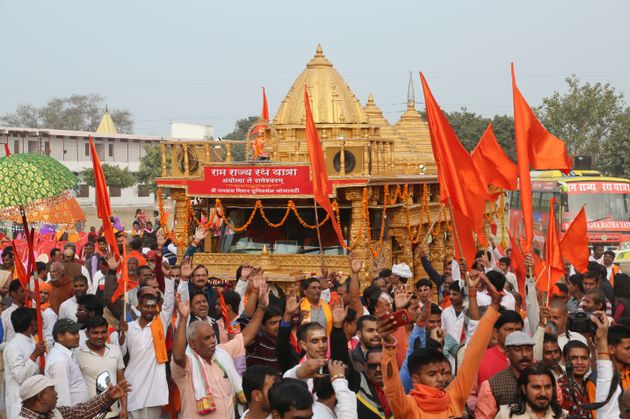 Applause Entertainment, a production company owned by the Birla group, has abruptly scrapped the production of a show which was set against the backdrop of Hindutva in India, including how the seeds of communalism were sown during BJP leader LK Advani’s Rath Yatra in 1990.

According to people familiar with the development, the show was called Saffron Skies and the crew shot for nearly 10 days in Mumbai before the top brass at the company decided to call it off midway

A source involved with the production told HuffPost India that the company was worried about possible backlash, given the political nature of the show. Applause, however, denies that this was the reason.

Director Sanjay Upadhyay, who wrote and developed the script, confirmed the development.

“Yes, the show isn’t happening anymore. They simply told me there were creative differences without being specific about it. It came as a surprise,” he told HuffPost India.

Applause Entertainment, which earlier produced movies such as Black (2005), had been dormant for around 10 years before Aditya Birla Group chairman Kumar Mangalam Birla hired Sameer Nair in 2017 to revive the firm and produce content for streaming services such as Amazon Prime Video, Netflix and Hotstar.

Among the many shows planned is a show titled India Strikes—10 Days, a show on the contentious ‘surgical strikes’ carried out by the Indian Army along the LoC in 2016.

Nair, CEO of Applause Entertainment, denied that the company was worried about the reaction to the show. The show, he told HuffPost India, was put on the back-burner because the company wasn’t pleased with the execution.

“There weren’t any external factors,” he said. “We wanted it to look a certain way, in terms of scale and production, but that vibe wasn’t coming through. It’s an outstanding script and we hope we do get back to it at some point.”

When asked why the company couldn’t recruit a different technical team to produce the show in a manner acceptable to them, Nair said they were occupied with other shows, including the one on surgical strikes.

Indian filmmakers have often faced opposition when they have tried to handle ‘sensitive’ subjects that offend people’s sentiments, not a particularly difficult task in India. The Central Board of Film Certification (CBFC), known as the censor board, often gives a tough time to filmmakers by demanding arbitrary cuts for reasons ranging from the length of a kiss to the utterance of the word ‘lesbian’, and non-state actors encouraged by the government’s inaction don’t think twice before threatening violence.

For Sanjay Leela Bhansali’s ‘Padmaavat’, which had raised the ire of Rajput group Karni Sena, the CBFC had set up a panel of historians and academicians to establish whether the movie was distorting history or not.

While the rise of streaming services had enabled Indian viewers to watch uncensored content, encouraging some filmmakers to experiment, worryingly, companies including Netflix and Hotstar are planning to ‘self-regulate’ their content in a bid to keep the government out of their business.

Filmmaker Ekta Kapoor also said in 2017 that she would practice “self-censorship” and would not make “any movie on a mythical Hindu character”.

The threat of censorship extends off screen as well. Just last week, veteran actor-director Amol Palekar was repeatedly interrupted by government officials for criticising a recent move by the culture ministry.

While it is not new for activists and artists to be impeded in their work (the most famous example being India’s Emergency), the impunity with which right-wing forces try to shut down critical voices has increased since the BJP came to power in 2014.

Things To Know Before Buying a Used Car

Used cars happen to be a brilliant deal for buyers in terms of both quality and cost. But, purchasing a used car is not that easy as buying a new car. There are so many things that you must consider before buying used car and these aspects require a lot of effort and time. A […]